Star Wars is for Everybody: The #SWRepMatters Panel at Star Wars Celebration Chicago

The following coverage of the #SWRepMatters panel from Star Wars Celebration Chicago, written by Ross Brown and edited by BJ Priester, is republished from FANGirlBlog.com, courtesy of Tricia Barr. Click here for the original article.

“Star Wars is for everybody,” John Robinson, a panelist, stated early in the #SWRepMatters Panel at Star Wars Celebration Chicago (“SWCC”). It is the underlying belief behind the hashtag #SWRepMatters, which began more than a year and a half ago as the brain child of Kate Sanchez, Swara Salih, and Jessica Shitara. The hashtag quietly took on an increasingly larger presence on the Twitter platform through monthly campaigns focused on the absence or paucity of marginalized groups in the Galaxy Far, Far Away.  Undoubtedly due to its popularity, the organizers requested and were granted one of the highly coveted slots in the Celebration Fan Stage schedule. Convened before a packed crowd of fans and onlookers on April 14 in the early afternoon, the panel assembled may have represented the most diverse and inclusive membership of any panel at SWCC.

Moderated by Salih, the panel represented people of color as well as individuals who identified as LGBTQ. An early question to Connie Gibbs prompted a response that highlighted a virtue of the hashtag: that it introduced people like herself to characters in the Star Wars universe that she might have not otherwise had been aware of because they are not promoted in mainstream spaces.  Likewise, John Robinson noted that the hashtag helped highlight that there were other people like himself who had the same love of the franchise. When polled about their favorite characters, Gibbs referenced Jannah, the newest woman of color to appear in a Star Wars film. Likewise, Robinson spoke about how much he appreciated Finn, a fellow black man with a military experience like his own. Shitara praised Rose Tico, an Asian-American woman character who was presented without an accent or being of an Asian-based culture, something that she had not seen anywhere else.

Part of the panel involved a slideshow organized by Salih of Twitter responses and participation with the hashtag in past campaigns. The tweets covered a diverse group of fans who noted the wonderful presence of disabled characters, characters from marginalized groups, and different sexual orientations. Salih remarked that this was one of the best parts of the #SWRepMatters campaign, providing a space for voices that otherwise might never be highlighted, never be heard. 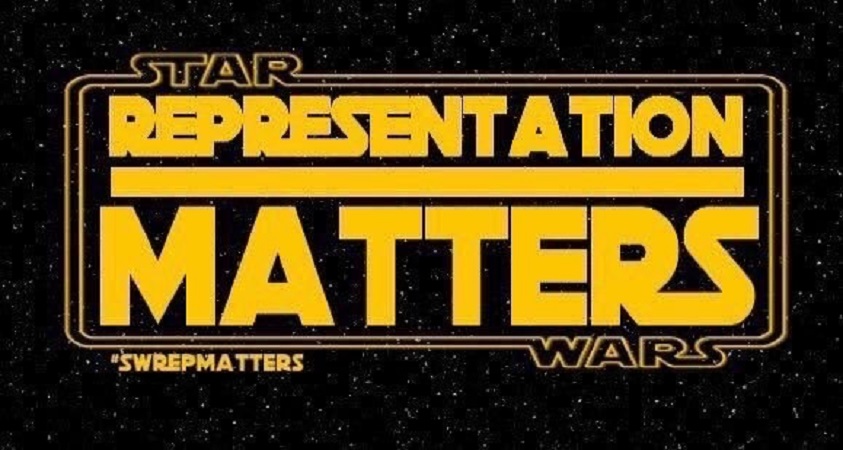 The question of representation on the creative and production side was brought up, and it underlined the importance of different voices. Gibbs emphasized how the absence of a diverse and inclusive creator/production naturally leads to blind spots. Robinson followed up by noting that creators without a more diverse or inclusive insight had led to appropriation of different cultures without adequate representation of those culture’s members in the films. Kate Sedor pointed out how instrumental the editing of Marcia Lucas played a role in the original trilogy’s success, as well how Carrie Fisher made Leia Organa into the character beloved by millions.  The question was left lingering how much better the franchise could have become if it had included more voices like theirs in the creative process. Maia Mrkvicka chimed in about how it was great to see that women directors were being given a chance with The Mandalorian, but that more women need opportunities within the franchise.

One of the last questions of the panel noted the representation of LGBTQ+ characters in the Star Wars comics and books, such as Dr. Chelli Aphra and Sinjir Rath Velus, but asked why there wasn’t representation in the films. Gibbs noted that unfortunately such inclusions still made some people mad, and the money at risk in a film led to the powers being simply unready to take the same risks as publishers. The effort to include representation by the editors of Del Rey was praised by the panel, as was comic writer Greg Pak, who strove for diversity in his works on the premise that having just one individual from a marginalized group forced that character to carry all the expectations of that group on his, hers, or their shoulders.

The #SWRepMatters panel concluded with a Q&A and book giveaway, as well as a loud and lengthy applause. The audio for the panel is hosted by the podcast Lousy Beautiful Town hosted by Jessica Shitara and Abby, and can be found here.  Even though the panel is over, along with SWCC, #SWRepMatters continues on with its monthly campaigns on Twitter. As on the social media platform, the panel represented a call for more inclusion and more diversity within the Star Wars universe, be it the creators or the characters.  Star Wars, after all, is for everyone.

Show your support for our team by purchasing a ko-fi! Proceeds help maintain the site and future projects such as podcasting and panel appearances.